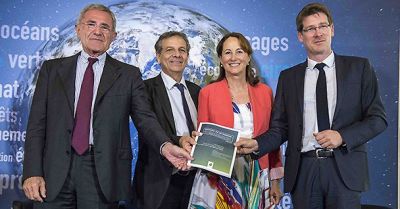 Implementing a carbon price corridor in the European Union Emissions Trading System (EU ETS) in order to give a clear and predictable price-signal for investors: the main conclusion from the task force (the Canfin Grandjean-Mestrallet Commission) is in line with recommendations The Shift Project has been promoting for the past two years. Published on July 11th, the report “Propositions pour des prix du carbone alignés avec l’Accord de Paris” (french only) highlights 10 carbon pricing proposals for France, Europe and across the globe. The report also stresses on the plurality of mechanisms and price levels to implement carbon pricing measures.

Mandated by the Minister of Environment, Energy and the Sea, Ségolène Royal, the Canfin Grandjean-Mestrallet Commission emphasizes the inadequacy of the price per ton of carbon on the EU ETS, which so far does not trigger the low-carbon investments needed to achieve the long term goals fixed by the Paris Agreement. According to Gérard Mestrallet, Chairman of Engie, the carbon price signal in Europe today is “inconsistent and in contradiction with the Paris Agreement.”

The Shift Project was auditioned by the Commission, in particular with regards to the EU ETS reform. The Canfin-Grandjean-Mestrallet report has made the legal study titled ”Why a carbon corridor is not a tax”, published by The Shift Project, the backbone of its legal analysis of the carbon price corridor that France proposes to introduce within the EU ETS.

The Shift Project also supports the proposals made in the report for national and sectoral measures – such as a national carbon tax on electricity production or technical standards limiting emissions of greenhouse gas power plants. These would only target coal plants and exempt gas, at least in the short term.

Finally, The Shift Project supports the idea of establishing a UN Commission to determine the relevant carbon price(s) to be implemented across countries or geographical areas, and to “define the indicative trajectory of a corridor of carbon social values aligned with the 2°C objective and the North-South transfer mechanism goals”.