Why a carbon price corridor is not a tax 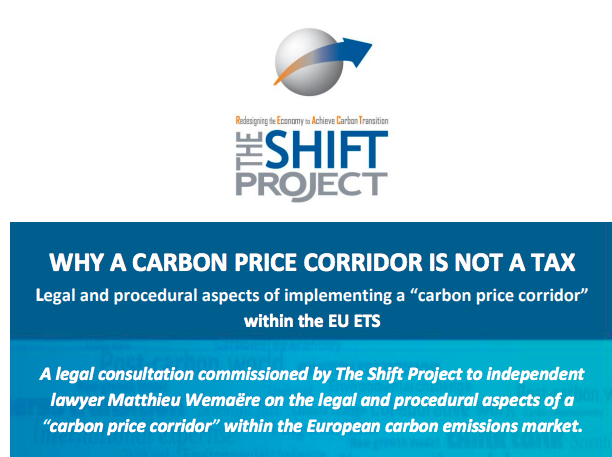 For the past two years, The Shift Project has been promoting the implementation of a price corridor within the European carbon market, through an auction reserve price and changes in the Market Stability Reserve (MSR). These proposals are currently supported by the French government.

The Shift Project commissioned a study to answer the main objection raised, in particular by the European Commission, according to which the adoption of this measure would transform the EU ETS into a tax, thereby imposing unanimity voting rule instead of qualified majority voting.

The author of this study, Matthieu Wemaëre, is a lawyer practicing in Paris and Brussels, formerly part of the “Carbon Markets” unit of the European Commission.

The study concludes that there is no legal obstable or procedural risk in adopting a price corridor. A price corridor within the EU ETS is neither more nor less attackable than the expected effects of scarcity of allowances. The adoption of a price corridor solely results from political choices.

The study dispels the legal risk that a carbon price corridor could lead to the requalification of the European carbon market as a tax measure (“tax” or “para-tax”), and seeks to demonstrate that the purchase of allowances does not constitute a compulsory levy, but a title transfer. There is no legal obstacle to the adoption of a price corridor. On the contrary, there is a strong legal basis.

The study dispels the risk of a possible blocking of the adoption procedure of the price corridor under the derogatory regime of unanimity on the basis of Article 192.2.a) TFEU, of which a Member State could claim the application by arguying that the price corridor constitutes a fiscal measure.

The study analyses the limits of a possible blocking of the adoption procedure of the price corridor under the derogatory regime of unanimity on the basis of Article 192.2.c) TFEU, of which a Member State could claim the application on the basis that the measure substantially affects its choice between different energy sources and the general structure of its energy supply: