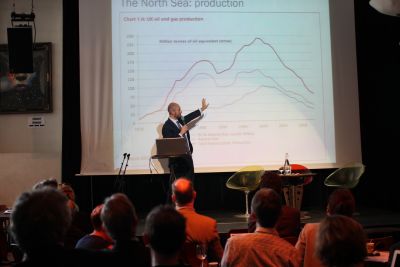 Dustin Benton is the director of energy and resources for the british think tank Green Alliance. He has been heading the low carbon strategy and resource management since 2011. Before joining Green Alliance, Dustin worked for the campaign to protect Rural England, where he worked on the links between landscape protection, climate change and new energy infrastructure.

On June 9th 2015, Dustin spoke at the Shift “Workshops” and gave an overview of the energy transition in the UK with a focus on the evolution of the electricity sector from a historical and political perspective. He reminded the audience that the electricity sector was still dominated by coal as well as gas and oil from the North Sea.

While things are beginning  to change, Dustin Benton says the UK will use these energies for the next thirty years. He insisted on the role played by politicians in making the energy transition a success; and Green Alliance has contributed to getting the three main political parties to agree on a commitment that ensures the fight against climate change, the adoption of the Climate Change Act and the decarbonisation of the electricity sector.

The energy transition is part of the Climate Change Act, which is based on a long-term strategy aiming to reduce emissions from 400gCO2 / kW to 50gCO2 / kW by 2030. The United Kingdom primarily relies on offshore wind and the EMR (Electricity Market Reform), based on a minimum price for CO2, the Feed-in-Tariff for any low carbon plant and a capacity market coupled with the wholesale market.

Dustin ended his speech by evoking the challenges of the energy transition, including social acceptability, or a better management of energy demand.