“Energy-Climate Scenarios: Evaluation and Guidance”: new report by The Shift Project with Afep 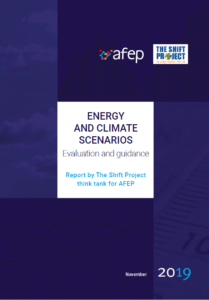 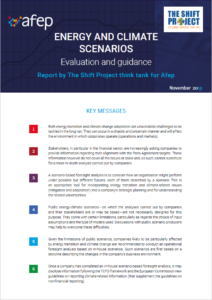 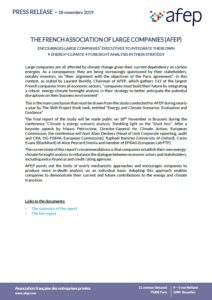 Climate crisis: a report commissioned by Afep (the association of major French private companies) calls for overcoming the limits of energy-climate scenarios

Over the years to come, the necessary energy transition and adaptation to climate change’s consequences will play a major role in public and private organisations’ decisions, and companies in particular. The transformations required to meet the Paris Agreement targets are of such scale that they are an unprecedented challenge for economic players. These transformations may be chaotic, with far-reaching technological, political, economic and social disruptions. To cope with the inevitable upheavals, companies need to develop an in-depth knowledge of how their own business model could be impacted by energy and climate changerelated issues.

The tools of strategic foresight enable the confrontation of the robustness of an organization’s strategy, with hypotheses on possible futures, some of which being undesirable

Climate and energy transition issues require the re-establishment of a full-fledged strategic foresight analysis within companies. A need which public transition scenarios such as “2°C scenarios” do not meet, for two main reasons. On the one hand, they were not originally designed for this purpose. On the other hand, they have serious methodological limitations, notes a report by the think tank The Shift Project for Afep, the French Association of Large Companies. The report, entitled Energy-Climate Scenarios: Evaluation and Guidance, will be published on 18th November in Brussels, at a conference organised by Afep and during which Mauro Petriccione, Director General of DG CLIMA, will speak.

The necessary transition to a low-carbon world and adaptation to climate change are challenges which threaten to disrupt the business environment of companies. They require companies to reclaim the tools of strategic foresight, says the French think tank The Shift Project in a report commissioned by Afep, which brings together 113 of the largest French companies in all sectors.

The tools of strategic foresight enable the confrontation of the robustness of an organization’s strategy, with hypotheses on possible futures, some of which being undesirable. These tools, developed in the wake of the Second World War, are very well suited for the physical materiality and uncertainty that characterize the problem of climate change and other planetary boundaries.

“Energy transition is a challenge laden with uncertainty, though unavoidable. In order to be fully integrated into decision-making, it requires the implementation within companies of robust methods of analysis of the future, capable of creating trust both internally and externally”, stresses Laurent Morel, a director of The Shift Project and initiator of the study.

The limitations of public climate scenarios such as “2°C scenarios”

Public scenarios such as “2°C scenarios” or “1.5°C scenarios”, on which the validation of companies’ climate strategies is currently largely based, cannot be sufficient to ensure the coherence and robustness of such strategies, observes The Shift Project.

These scenarios are most often based on integrated assessment models (IAMs) that have not been designed to describe and accompany deep economic and societal disruptions. They also contain significant methodological limitations. These limitations relate to strong assumptions that, in most cases, are not well explained or consolidated. These bold hypotheses include:

Publicly available “2°C” climate scenarios assume on average a 3% per year energy efficiency gain over the 2020-2040 period. Such a trend has never been observed, including during oil shocks. In some cases, it amounts assuming the growth of an economic activity, without an increasing need for energy: certainly highly desirable, this fundamental break is not sufficiently explained in scenarios. The IEA’s latest annual report shows an energy efficiency gain of only 1.2% last year. The scenarios presented as compatible with global warming trajectories of 2°C or 1.5°C analyzed by The Shift Project are those of the International Energy Agency, Greenpeace, IRENA, several major oil companies and those used by the IPCC. 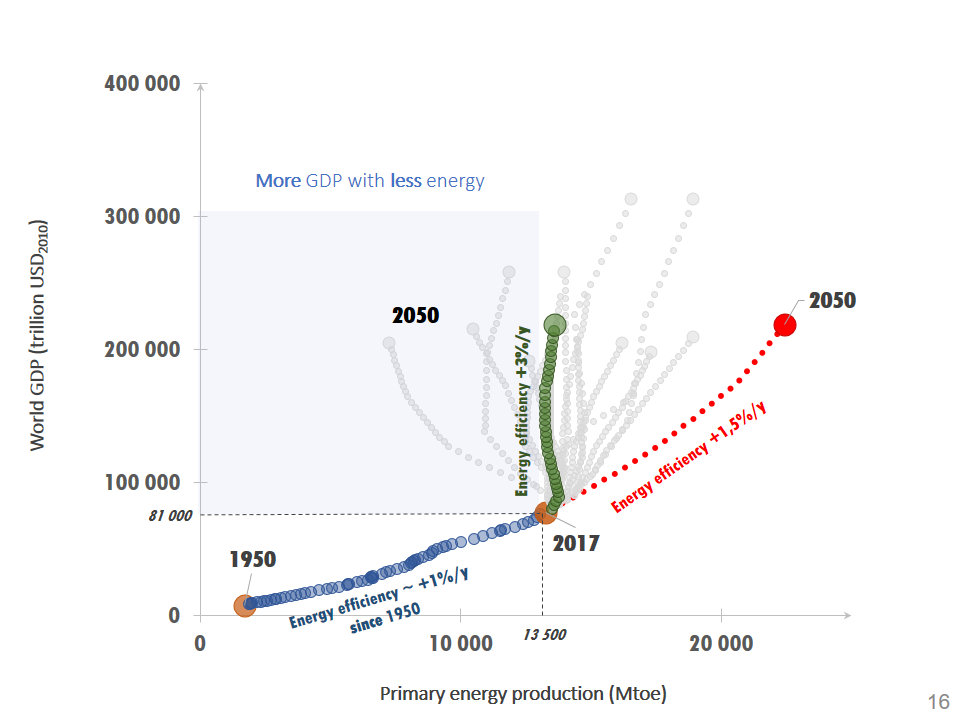 An illustration of the link between Energy and GDP in the scenarios studied
The analyzed scenarios assume an unprecedented improvement in energy efficiency. A strong hypothesis, weakly supported in most of the studied scenarios studied.
In blue, the historical values (1950 to 2017). In red a projection with an improvement in energy efficiency of 1.5% per year (the highest yearly rate we have been able to achieve in the last 30 years). In green the “average” of the scenarios analysed. In grey the different scenarios we analysed.
Source: World Bank (GDP), BP stat 2018 (primary energy), documentation of scenario producers.

Developping strategic foresight at the scale of the business environment, and fostering dialogue with scenario designers

The Shift Project invites companies to develop strategic foresight at the scale of their business environment, focusing on an analysis based first and foremost on physical flows. The report includes examples of companies that have already embarked on such an approach, and provides methodological guidance.

Faced with the multiple challenges of the energy transition, The Shift Project urges companies to initiate an in-depth dialogue with scenario designers, and to move towards a better consideration of risks, but also of opportunities for adaptation and transformation of economic models. Afep supports the diagnosis and recommendations of The Shift Project’s report. Afep’s President Laurent Burelle has recommended to the 113 member companies’ Presidents and CEOs of the to implement the scenario-based foresight analysis presented in the report by integrating it into their strategy.

Co-authors for The Shift Project are project manager Romain Grandjean, member of the board Laurent Morel and vice-president Michel Lepetit, in association with Afep (Association française des entreprises privées). It is the continuation of a first study published in February 2018: “Climate risk analysis: Stakeholders, Methodologies, Perspectives”. As part of this work, The Shift Project published in 2019 with IFPEN a note on the energy-climate-economy models that feed into the scenarios: “État des lieux et limites de la modélisation énergei-climat au niveau mondial”. As part of another research programme, The Shift Project has also published in 2019 “Guidelines on future studies on energy and power transition”.