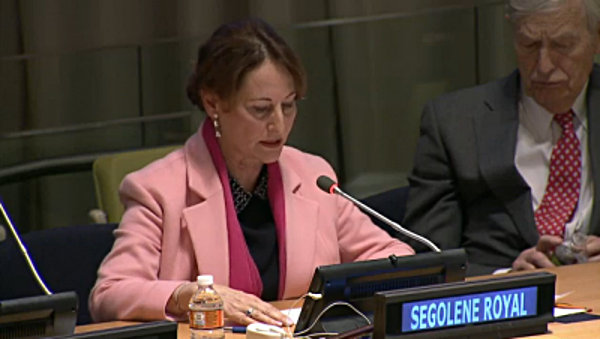 The Shift Project was delighted to hear French Minister of Ecology Ségolène Royal call for the implementation of carbon pricing in terms similar to the Shift’s recommendations.Royal spoke at the Investor Summit on Climate Risk, which brought together many leaders such as Christiana Figueres, Michael Bloomberg and Ban Ki Moon on 27 January in New York. She advocated “the idea of a price window between a floor price and a ceiling price”, a key component of the Shift’s recommendations which seek to strengthen the carbon price signal within the EU emissions trading system (EU ETS). The Minister’s statement comes on the heels of major COP21 announcements such as the launch of the Carbon Pricing Leadership Coalition and President Hollande’s closing address where he pledged to “form a coalition to achieve a carbon price, and for investments to be re-directed.”

The Shift Project will continue to work with the appropriate French and European institutions to remove the obstacles impeding the emergence of a strong carbon price mechanism. Such a mechanism should trigger the energy transition on a massive scale, while avoiding relocations, and boosting employment in Europe.

Carbon pricing is now widely recognized as a major lever for the transition to take place. Obstacles remain, such as divergent national interests, hesitant regulators and reluctant industries despite support from a number of companies. The Shift Project encourages the French government to move forward. Our experts will continue to produce relevant recommendations to support this critical effort.