Flying in 2050 : What aviation in a constrained world ?

Few industries, other than aviation, occupy such a unique place in the energy transition landscape. High-tech industry with negligible climate impact for its advocates, fad of the ultra-wealthy prone to minimise their emissions for its detractors, it generates polarising opinions and sometimes useless oppositions.

The authors of this report support the idea that another voice must be heard beyond these extreme positions.

In May 2020, a first report named “Crisis, climate: preparing aviation’s future” offered a series of carbon-free measures that the government could demand in return for its support to the industry. By targeting immediately actionable measures with significant effects as soon as 2025, this report supported the idea that the recovery of an industry severely impacted by the crisis was not incompatible with the launch of an effective decarbonisation policy. On the contrary: it argued that delaying the energy transition of aviation makes it all the more vulnerable to the threat of climate change.

The nine months that separated us from this publication have been marked by contrasting events. Although Airbus has committed to producing a hydrogen-powered aircraft in 2035, although the public statements made on the decarbonisation of aviation have multiplied, the health crisis has continued, impacting the financial balance of many actors now facing an unprecedented risk of bankruptcy. But in these nine months we have also seen many voices rise, those of engineers, pilots, air traffic controllers, airline employees and aviation users who saw themselves reflected in the speech of the Shift Project’s report. Expressing their interest in the process, highlighting its shortcomings and limitations, led many of them to wish for a deeper analysis.

These are the contributors to this new report: professionals in the industry, eager to confront the distressing but inevitable question of how to act today to keep on flying tomorrow in a world under constraint. If no one disregards the suffering and helplessness created by the COVID-19 crisis, there’s unfortunately much worse threats looming in climate change, depletion of fossil energies and the collapse of biodiversity on human life in general, and on aviation in particular.

All of us who love aviation and those of us who have made it their job, all of us who love technical matters, great discoveries, all this prodigious human intelligence dedicated to fly machines, we affirm that we love even more life, nature and science – that very science which also rigorously describes the aerodynamic and climatic phenomena, this very science we cannot on the one hand enjoy the benefits from and on the other ignore the upheavals it predicts.

We, aeronautical engineers, pilots, air traffic controllers, air companies employees, users or simple aviation lovers, tired of polarizing speeches it suffers from, we sign-up this report with the ambition of creating the conditions for a peaceful debate on its ability to drastically reduce its greenhouse gas emissions, in proportions compatible with a viable world in 2100. We, climate-related aero-lovers, claim that we can be part of the solution rather than the problem, by carrying a transparent, disinterested and scientifically supported speech on what the aviation industry can – but also cannot – do to decarbonise itself. 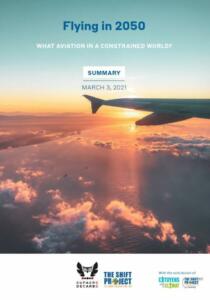