“Lean ICT: Towards digital sobriety”: Our new report on the environmental impact of ICT 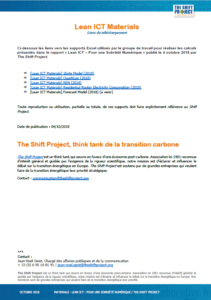 The energy consumption of Information and Communication Technologies (ICT) is increasing by 9% every year. It is possible to limit this growth to 1.5% per year by moving to sober digital practices. The digital transition as it is currently implemented participates to global warming more than it helps preventing it. The need for action is therefore urgent. Such is the main conclusion of the carbon transition think tank The Shift Project’s report on the environmental impact of ICT. If we do not tackle this impact, ICT will be part of the problem rather than part of the solution.

Because digital technologies are recognized as essential for economic and social development, digitalization appears as an absolute need for all countries and companies. It is also considered as a way to reduce energy consumption in many sectors. However, direct environmental impacts as well as indirect environmental impacts (rebound effects) related to the growing use of ICT are constantly underestimated.

The fast expansion of ICT leads to a rapid increase of its direct energy footprint. This footprint includes the energy used for the production and the use of ICT equipment (servers, networks, terminals). This direct footprint has been increasing by 9% per year. Compared to 2010 the direct energy consumption generated by 1 euro invested in digital technologies has increased by 37%. The energy intensity of the ICT sector is growing by 4% per year, in stark contrast to the trend of global GDP’s energy intensity evolution, which is declining by 1.8% per year. The explosion of video uses (Skype, streaming, etc.) and the increased consumption of frequently renewed digital equipment are the main drivers of this inflation.

A heavy carbon footprint for digitalisation

Digitalisation taps resources that are critical for the energy transition. The appropriation of a gradually disproportionate part of available electricity increases the tension on electricity production, which we already struggle to decarbonize. The increase in the production of ICT equipment requires larger quantities of rare and critical metals which are also vital for low carbon energy technologies, while physical, geopolitical and economic factors already limit their availability.

Where are the merits of digitalisation?

The net contribution of ICT to the reduction of global environmental impacts is still yet to be demonstrated, sector by sector, and this demonstration must take into account the numerous “rebound effects”. The real trend of digitalisation is in opposition to its presupposed function of “dematerializing the economy”. The current evolution of ICT’s environmental impact goes against the decoupling of energy consumption from GDP growth, which is an objective of the 2015 Paris Agreement.

The expected impacts of the digital transition on growth and productivity remain invisible in developed countries over the last 5 years. While GDP growth remains stable around 2% in OECD countries, the annual growth of digital expenditures has increased from 3% to 5%. Expected effects of digital technologies are thus far from being obvious or automatic.

Digital consumption is currently highly polarized. Digital consumption profiles are extraordinarily contrasted. In 2018, every American owns an average of 10 digitally connected devices and consumes 140 Gigabytes of data per month while in India these ratios are of one device and 2 Gigabytes per month.

Digital overconsumption is not yet generalized: it is caused by high income countries, for which the major issue is to take back control of their digital consumption behaviours. For every country, high or low income, a key challenge is to plan and prioritize investments in the ICT sector, and thus to ensure that they effectively and efficiently serve sectoral policies. Developing countries will derive the highest benefits, because infrastructures have yet to be created and thus much spending can be avoided by careful planning and prioritization.

The Shift Project proposes the following definition for “Lean ICT”: buy the least powerful equipment possible, change them as rarely as possible, and reduce unnecessary energy-intensive uses. This lean approach is a form of “digital sobriety”, which is also a source of efficiency for organisations: energy efficiency, human efficiency, financial efficiency. Its principle expands to a societal level, and confirms the relevance, of the objectives pursued by technical approaches such as “Green IT”, which are for now primarily targeted at Information Technology Departments and Directors.

Moving from intemperance to sobriety in our relationship with digital technologies would limit the increase in digital energy consumption to 1.5%. While this is in line with the global trend for all sectors combined, it is still not compatible with the Paris Agreement’s objectives. The implementation of the digital sobriety thus only a containment strategy for the ongoing explosion of ICT’s environmental impact. As presented in our 2018-2025 “Sobriety” scenario, this digital sobriety would not actually challenge the core principles of the digital transition. Indeed, in this scenario, the volume of data continue do grow, and the number of smartphones and televisions would stabilize around its 2017 level, while their markets in developed countries are already close to reaching saturation.

Are we up to the collective challenge of becoming digitally lean?

We need to accelerate the awareness of the digital environmental impacts among the general public and the research community, as well as in corporations and public organizations, as a precondition to action. This awareness will enable the integration of the impact of ICT as a decision criterion in every policy for the buying and use of ICT equipment. Because of the global scope and economic power of the main digital players, both awareness rising and action must happen on a European level and hand in hand with international multilateral institutions.

Public and private organizations have a key role to play, by managing their digital transition in an environmentally friendly way… but they need the right tools and references. Organizations must be able to assess the environmental impact of the digital component of their potential choices, on all decision levels.

The Shift Project has developed such tools. The Digital Environmental Registry (DER) provides, in a way accessible to non-specialists, verified figures representative of the quantity of energy and raw materials required for the production and use of common digital technologies. The Shift Project calls on the public authorities to set up a public database to enable stakeholders to analyse their environmental impact. Such a database could be based on the model of existing carbon impact databases such as the French “Base Carbone Ademe”. This would make it possible to carry out a carbon assessment of major digital projects before they are launched. The Shift Project also puts forth measures for executives enabling them to manage the demand and the consumption of digital services, and public policy principles that can limit the environmental impact of ICT. These tools are intended for both developing and developed countries.

It is critical to recover our individual and collective abilities to challenge the social and economic benefits of both our purchasing and consumptions behaviours of digital objects and services. Then, we must learn to adapt them in consequence. Are the supply-side pressure of the combined GAFAM (Google, Apple, Facebook, Amazon, Microsoft) and BATX (Baidu, Alibaba, Tencent, Xiaomi) and the expectations of GDP growth related to digitalization too strong drivers? They should not be the sole judge, jury and executioner of ICT projects and of digitization: other criteria have to be taken into account in order to make sure the ongoing digital transition will lead to an environmentally and socially sustainable society.

Corporations have a key role to play, and much to gain – notably the long term continuation of their digital transformation, and the limitation of costs that can otherwise run amok.

For developing countries, the potential economic, environmental and social benefits of lean approaches are the most promising, as infrastructures are yet to be developed.

For developed countries, it is high time to question the multiple aspects – social, sanitary, etc. – of digital overconsumption, in addition to its environmental impact. Shall we? Dare you?